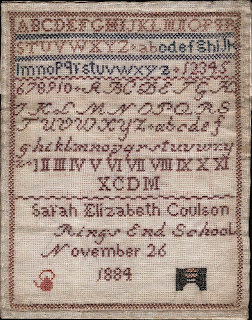 On Saturday 5 May 2012 Wisbech & Fenland Museum will be holding a temporary display of 18th and 19th century embroidery samplers from the museum’s collection. The free display will be held in the library and will be open from 11am till 3pm. This display will be a chance to see examples of embroidery that are usually not on public display, and haven’t been so for a number of years.

Included will be pieces worked on by local school girls, such as: Hannah Tuck and Ann Falter from Upwell and Sarah Elizabeth Coulson from Rings End. Also on display is an impressive mourning sampler from 1864 by Elizabeth Booth, this sampler is a memorial for several of her family members. Some of the samplers are especially detailed and eye-catching, including one by Ann Mackman dating from 1825 which includes several embroidered images, including a house, animals and flowers.

The museum would also like to ask members of the public who visit the display if they have any information on the embroiderers whose work is featured, as the history of those who once lived in Wisbech and its surrounding areas is of great interest.

This display on embroidery samplers also coincides with an interesting exhibition of modern textile art by the Fen Edge Embroidery group held in the museum’s Hudson room, allowing visitors to see how this art form has evolved over the past three hundred years.

The exhibition can be viewed at other times by prior appointment.

The exhibition has been curated by Sophie Woods from Terrington St. Clements, who is studying Fashion and Dress History at the University of Brighton. Wisbech & Fenland Museum
Wisbech & Fenland Museum is one of the oldest museums in the United Kingdom. Not only containing local artefacts from the surrounding Fens, but objects from far flung Egypt and China. The Museum also houses two historic libraries and a substantial archive, holding diocesean and borough items. The collections were initiated by the town's Literary and Museum Societies which were formed in 1781 and 1835 respectively. Since the Museum opened in 1847, the collections have continued to grow, but the essence of the Museum remains virtually unchanged. From the current Art Exhibition and Ornithology collection, to the human rights campaigner Thomas Clarkson's travel case, and letters written by the world famous Siamese twins Chang and Eng, the extensive variety here ensures there is something to interest everyone. So come and discover a treasure house of rare and unusual artefacts, illuminating history, both local and and worldwide, recent and ancient.